As We Remember 9/11, Muslims Must Recognize That All of Humanity is Part of Their Community 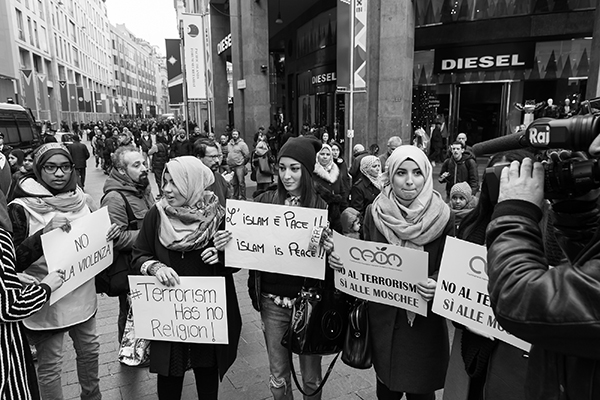 This past year’s anniversary of the  9/11 attacks in America, I am reminded of how far Americans and humanity as a whole have come from that horrific incident that killed almost 3,000 innocent people in the United States. But similar atrocities and acts of terrorism remain a daily occurrence for ordinary people living in the Middle East, Africa and Central Asia alike.

The threat of transnational terrorism and violent extremism from groups like the Islamic State militant group (ISIS), Al-Qaeda, Boko Haram and Al-Shabab—to name but a few seems—seems to be increasing. There is clear evidence based on social science datathat the vast majority of individuals killed by transnational Islamist extremists have been fellow Muslims, who reject the appeal and totalitarian language and worldview that these organizations offer.

For centuries, Muslims within and outside the Arab world have coexisted, flourished and reconciled real and/or perceived differences and found practical approaches to conflict resolution in their respective locations. Yet in the modern age, there is a tendency to quickly deduce matters simplistically—whether into racial categories of black vs white or religious categories of Christian vs Muslim—when in fact the interplay between these dynamics is complex.

In the 13th century, for example, the West African scholar and intellectual Al-Hajj Salim Suwari established a movement that focused specifically on the rights of non-Muslims in Muslim-majority nations. Emphasizing their equal protection under the law, and capturing from the essence of the Madinan constitution, a legal and societal framework in early Islamic society, demonstrating the early Islamic polity was keen in an equitable balance amongst all members of their society.

In Central Asia, a historical beacon of Islamic spiritual and intellectual learning, scholars have been critical to advancing both Islamic and Western sciences. Imam Bukhari, a compiler of the sayings of the Prophet Muhammad, was born and resided in present-day Uzbekistan. The work of Muhammad ibn Musa al-Khwarizmi, a ninth-century Persian scholar, was instrumental in aiding the world in algorithm design that lies at the heart of computer science. And Al-Farabi, who contributed to Aristotle’s work on logic and who wrote one of the greatest medieval studies on music, was from modern-day Kazakhstan.

In the United States, the late Imam W. Deen Mohammed, who died in 2008, led the largest movement of indigenous Americans to Sunni Islam and instituted an Islamic revivalism and 42-year counter-radicalization program with followers promoting and advocating interfaith dialogue, civic participation and respect for religious pluralism.

These individuals and others demonstrate a diversity of Islamic thinking that historically was known in their societies, but have been all but been erased in the modern era. And it is within that idea that ordinary and just everyday Muslimwho study scripture for a deeply personal and spiritual connection with the divine can offer us all some insight into how Muslims  and specifically those living in the West can reimagine how they are to see their faith.

It shouldn’t take a terrorist incident—whether it be carried out by a racially-motivated ethnonationalist like Dylan Roof or an Islamist extremist in the Middle East, Europe or the United States—for communities to respond appropriately. Muslim communities across the world, whether they are in Muslim-majority nations or in diaspora communities, are challenged with the important task of thinking through how our faith is perceived and, also, how we want it to interpret it based on the specific context that that we live in.

The Islamic ummah, or community, is an idea and concept expressed throughout the Quran. But we are also collectively confronted with establishing a partnership with our fellow humans, including non-Muslims, to embrace and respect the dignity and honor of every individual on our planet.

Seeing Muslim and non-Muslim communities alike as part of an ummaht hat shares a value system of respect, honor and tolerance: This sort of interpretation does not reject nor seek to discredit the belief systems of individuals respective faith tradition, or those with no religious traditions at all. On the contrary, it offers a symbolic gesture of peace in which lifestyle choices, religious differences, and even ideas in direct opposition of one’s worldview are still respected and allowed in order to ensure a state of balance in society.

Once we can collectively ensure that these views are encouraged and protected, then the ummah of humanity will be realized and practiced.