New Wave of Neo-Nazis Take Inspiration from Russia and Assad, not Nazi Germany 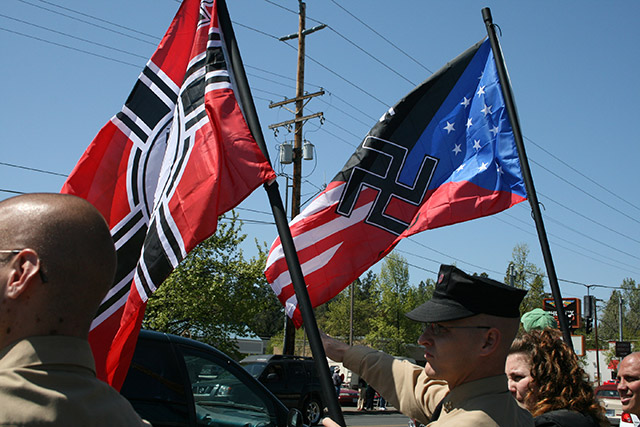 The recent wave of neo-Nazism, most prominently evident in North America, has adopted traditional Nazi symbolism such as swastikas and Nazi salutes like “blood and soil.” Yet this movement has less to do with Nazi Germany, and much more to do with current political players such as Russia, Bashar al-Assad, and even ISIS.

Neo-Nazis see Russia as the heart of white nationalism, with former Ku Klux Klan leader David Duke describing it as “the key to white survival.” Richard Spencer, a prominent white supremacist figurehead, and spouse of Moscow mouthpiece Nina Kouprianova, described the nation as “the most powerful white power in the world,” while many others in these circles now see Putin as the de facto “leader of the free world.”

Though Putin has distanced himself from the ideology, Kremlin-funded outposts such as RT and Sputnik continue to espouse views typically taken by the extreme right-wing, repeatedly inviting Spencer and Kouprianova as geopolitical analysts.

RT’s coverage of the Jade Helm 2015 military training exercises further added fuel to the conspiracy theories that Obama was planning to “invade” certain states and start “some kind of war between America and itself.”

While there are no direct links between Russia and the unfortunate events that occurred in Charlottesville, the flagrant support that Moscow enjoys from the organisers of the Unite the Right rally, such as the likes of David Duke and Richard Spencer, cannot be missed.

Speaking of Charlottesville, another, perhaps unexpected influence, was that of Syrian president Bashar al-Assad.

The Facebook page of James Alex Fields, the white nationalist charged with the murder of Heather Hayer after he rammed a car into demonstrators in Charlottesville, is a dystopian microcosm of the kind of propaganda that populates the minds of these neo-Nazis. Among the plethora of images of swastikas, memes of Trump, and Pepe the Frog, Assad had a seemingly out of place presence on the white supremacist’s social media page. In one photo, Assad is depicted in full military uniform with the caption “UNDEFEATED.”

Yet Fields is not alone in his admiration for Assad in the growing neo-Nazi movement. In a video posted on Buzzfeed reporter Brandon Wall’s Twitter feed, three other men who took part in the Charlottesville hate rally are shown proudly affirming their support for Assad. One of them wears a t-shirt with the slogan “Bashar’s Barrel Delivery Co”, and says “support the Syrian Arab army and [expletive] fight against the globalists”, while the man filming replies with “Assad did nothing wrong” and “barrel bombs, hell yeah!”

Assad’s rise to popularity among America’s neo-Nazis perhaps began when David Duke tweeted in support of the Syrian president, describing him as an “amazing leader” and “a modern day hero standing up to demonic forces seeking to destroy his people and nation.” The series of tweets was accompanied by an image of Assad, in dark glasses and military apparel, similar to the one shared by Fields.

In fact, the far-right’s fascination with Assad has, at times, surpassed their support for Trump. After Trump ordered the US military to bomb a Syrian air field in April this year in response to the sarin gas attack carried out by Assad in northern Syria, many far-right figures openly expressed their disapproval.

Paul Joseph Watson, editor of Infowars, the site run by extreme conspiracy theorist Alex Jones, wrote “I guess Trump wasn't "Putin's puppet" after all”, and that the move showed that “he was just another deep state/Neo-Con puppet”, sounding almost as if he regretted that the former was not the case. Other prominent right-wing voices such as author Ann Coulter, blogger Mike Cernovich, and Breitbart London editor Raheem Kassam joined in the criticism.

Neo-Nazis want, above all else, a restoration of white nationalism and white power, and a return to a totalitarian regime. It is no wonder then, that regimes such as the likes of Moscow and Syria hold a certain element of fascination for these individuals. But what is their endgame?

The surge of disenfranchised young men who turned up on the streets of Charlottesville may genuinely believe in their delusional realities, and while their behaviour is inexcusable, their testimony shows that their thought process is far from sophisticated. Peter Cvjetanovic, a 20-year-old student whose image from the rally went viral said:“As a white nationalist, I care for all people. We all deserve a future for our children and for our culture. White nationalists aren’t all hateful; we just want to preserve what we have.” While another marcher recorded a teary rant and complained that his newfound fame had gotten him kicked off online dating site OkCupid.

What is less certain is the naivety of those that worked for weeks, months, and years in bringing the Unite the Right rally to fruition. The only plausible motivation that remains for those who would covertly support far-right elements in the United States and, overtly, the Syrian regime, is a deep-rooted desire to disrupt the international order. A divided, weakened liberal world turning in on itself is exactly what the adversaries of Western democracy want, and this new surge of neo-Nazis is playing right into their hands.